INJURIES / INSTABILITY OF THE ANKLE

One of the most common injuries that you can sustain during activity is at the ankle. The ankle is stable because of the bony configuration of the joint as well as the ligaments that support it. Injury to our ankles usually occurs when our leg moves beyond the boundaries of the ligamentous support. 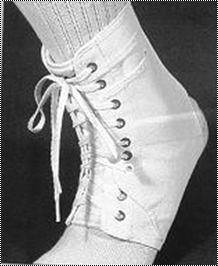 Clinical Evaluation:
Injury to the lateral ankle ligaments when someone sprains their ankle during sporting activities are the most common. The lateral ligament group is made up of three ligaments: the anterior talofibular (ATFL), the posterior talofibular (PTFL), and the calcaneofibular (CF). The ATFL is the weakest of the three ligaments and is usually the most common ligament injured.
Mechanism of injury:
The foot is placed in a position where there is most stress on the surrounding ligaments and tendons. While the exact specifics of the injury are often hard to remember, most people describe the ankle ‘giving way’ followed by pain, direct swelling, and often severe bruising.
Almost 75% of ankle injuries result in complete tears and 66% of these are involving the ATFL only. Radiology is used to rule out any fracture and/or avulsion (ligament tearing away bone fragments).
Treatment Options:
The severity of an ankle sprain is often unrecognised and therefore mistreated. For minor and moderate sprains of the ankle where moderate ligamentous injury is seen, the treatment often is as follows:

For severe sprains where complete ligament tears, severe swelling and tenderness are observed, debate remains as to the use of surgery. The use of surgery to repair ligaments and decrease functional disability should be discussed at length with your practitioner and only used after conservative options have been considered.